Sea and Earth ... Nature and History

The AMP, established in 1997, occupies a sea area of 15,091 hectares with a coastal extension of about 40 km. The territory is divided into Zone A of the integral reserve, Zone B of the general reserve and Zone C of the partial reserve. The dive sites are regulated and 16 of them are equipped with mooring buoy, reserved for authorized diving centers. Some buoys can be used by private individuals according to the regulation.

The islands of Tavolara and Molara

System of limestone and granite islands overlooking the coast of Olbia S.Teodoro. The island of Tavolara, which rests on the granite base in the western part, rises to 565 m. of altitude with P.Cannone to the south and to 510, to the north, with P.Castellaccio, with imposing cliffs overlooking the sea. The morphology is harsh and the island is largely inaccessible. The landscape of Molara is completely different, rising to just over 150 m. of altitude with less marked morphologies with outcrops of large boulders and granite boulders. Not far away is the rock of Molarotto equally of granite nature. The limestone of Tavolara and the granite of the smaller islands, despite the apparent scarcity of vegetation, offer an extraordinary richness of botanical endemism.

Due to the variety and richness of species, the most ecologically interesting areas from the underwater point of view are on small rock emergencies in the channel between Tavolara and Molara over 25 m. of depth. The coral habitat of Tavolara is clearly defined by gorgonians (Paramuricea clavata and Eunicella verrucosa), large sponges (Axinella polipoides, Spongia agaricina) and by “black corals” (Gerardia savaglia), a typical exacorals of deep sea; Corallium rubrum is absent, a widespread species even at low depth along the western coasts of Sardinia. The uniqueness of the Tavolara marine protected area is to offer, within the first 25 m. of depth, a variety of scenarios and populations so wide as to represent a synthesis of what the Mediterranean can offer. The growth of tourism and the moderate increase in sedimentation with the consequent slow regression of the Posidonia prairie are for now signs of a potential degradation, but not yet certainly a sign of a tendency to worsening. In this sense, the establishment of a protected marine area certainly guarantees a first step in managing the natural resources of this incredible reservoir of species now rare in other areas of the Mediterranean.

The seabed of the southern slope is characterized by the cliff environment, in some points it goes down straight to the depth of 22 m. At the foot of the wall, large landslides of boulders, grazed by sea urchins, alternate with areas colonized by Posidonia oceanica. Small karst ducts open at various points creating typical cave environments where the magnose (Scyllarides latus) reproduce.
The northern seabed is characterized by landslides. It is a relatively shallow area, which ends on a detrital plain covered with Posidonia meadows. In correspondence of the Punta del Papa, from 42 meters from the bottom three submarine spiers rise, the highest reaches 15 from the surface. This pinacle is constantly surrounded by clouds of castagnole, ready to open and immediately regroup for the frequent arrival of voracious amberjacks. Down from the ridge of the shoal, descending towards the northwest, the large paramuricee fans open up among swarms of red chestnut trees. The light of the torches brings out the bright red of the colonies; many have a yellow variant and the visual impact is even greater. Along two other lower pinnacles, also covered by gorgonians, we reach a large coralligenous area. Not infrequently, on the seabed, they can see groupers and shoals of snappers.

Remarkably different from that of Tavolara is the underwater landscape that is found around these two islands. Granites reproduce underwater scenarios under water. Large cracked rock panettone, pierced and rich in tafoni (erosion cavities) characterize the seabed between Molara and Tavolara. The dried Fico is a typical example of this kind of rocky environment. The granite covered with a thin felt of algae, hosts several colonies of hydrozoans (close relatives of corals and jellyfish), populated in turn by colorful nudibranchs (shell-less gastropod molluscs characterized by bright colors). Corvina and groupers are common in cracks and crevices. More deeply intricate coralligenous constructions give shelter to groupers, sea bream and lobster. From Molara to Molarotto, the rounded shapes are replaced by an underwater landscape bristling with spiers that alternate with large areas of detritus and posidonia where Pinna nobilis meets.

On the island of Tavolara much of the tree cover was sacrificed in historical times as a fuel for the production of lime, as evidenced by the mouths of numerous kilns on the western side of the island and some artificial walkways for the transport of timber. Reaching the upper part of the island, however, there are forests of minor maples, olive trees, mastic trees, holm oaks and junipers of unexpected size. There are 34 species of endemic plants present on the Tavolara islands. Of these, seven have been described for the first time on the basis of specimens collected on the island. Asperula deficiens is an exclusive species of Tavolara, and therefore one of the rarest plants in the world. Along the paths and in the cracks between the rocks of the island it is also possible to discover more common plants such as the Centaurea horrida, characterized by the classic spiny pulvini in the area of Punta Timone, or Centaurea filiformis, easily recognizable and widespread in the limestone areas. Many others are the species to be mentioned among these the purple and white flowers of the evergreen Limonium sinuatum; near the sea, but also 100 meters high, Limonium hermaeum, endemism of the western limestone of Sardinia. Higher up at the foot of the cliffs, in the shaded areas, meet the blue calyces of Campanula forsythii. Indifferent to the substrate, the Erodium corsicum, a small geranium endemic to Sardinia and Corsica, colonizes the cracks between the rocks. Spring will therefore offer a show full of colors, interrupting the monotony of the different shades of green that creeps between the cracks of the rocks. Molara is crossed by valleys in which large chestnut trees, olive trees, holm oaks and junipers testify to the presence of important aquifers of water flowing into many springs. Thus the island, which observed from the sea appears barren and inhospitable, turns out to be an incredible green oasis, even in the hot summer period. 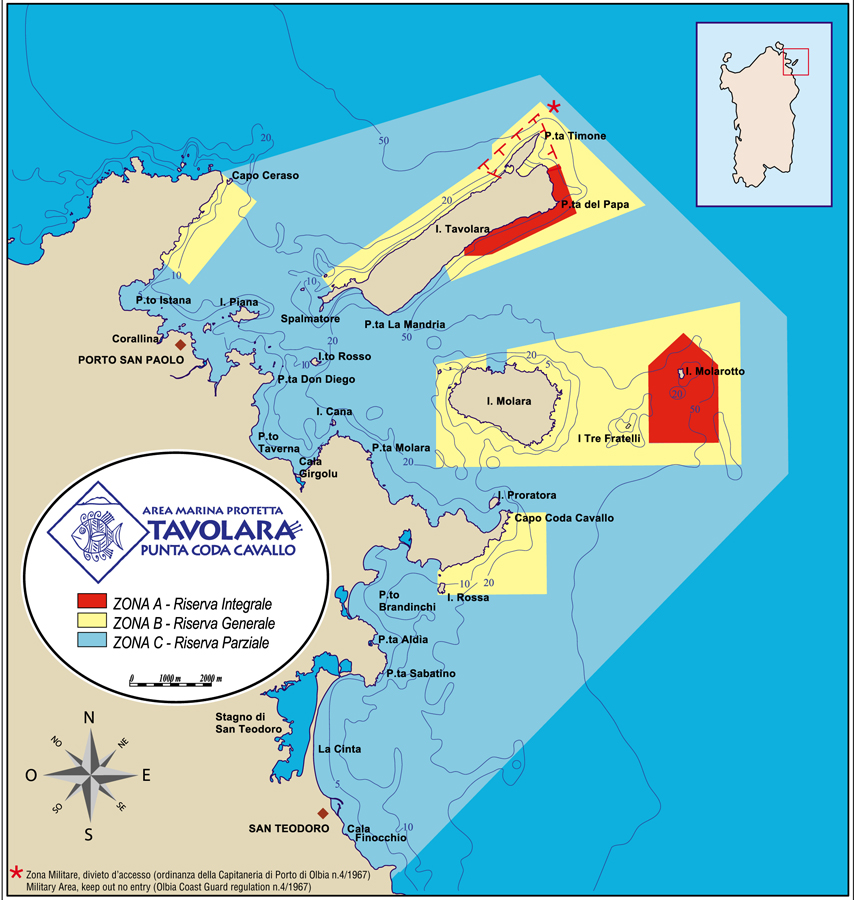 For further information and materials:

Rules of conduct in the Marine Protected Area